The Poopster felt somewhat left out when he didn't see his pug-like mug on the Mercury Sports Pigskin Pick 'Em board, so he wanted to put his two cents in about all the Week 1 area football action. Here's his take:

Boyertown at C.B. East
The Poopster knows the Bears are huge on both lines and feels they will make a good showing in their trip to Doylestown, but is still going to lean towards the Patriots ... C.B. East 31-23.

Cocalico at Daniel Boone
The Blazers are trying to bounce back from a 2-8 campaign and should be an improved squad, but the Poopster doesn't like their chances against the Lancaster-Lebanon Section 2 power Eagles ... Cocalico 35-13.

Owen J. Roberts at Conestoga
The Poopster feels that if the Wildcats can reverse their minus-17 turnover differential from last season, they will turn things around in a big way. Still, he's going to lean towards the Pioneers in this one ... Conestoga 21-17.

Perkiomen Valley at Plymouth-Whitemarsh
A marquee battle of squads with District 1-AAAA tourney designs pits the Vikings' slew of skill people led by QB Rasaan Stewart against a big and physical group of Colonials. The Poopster will give the edge to PV. ... Perkiomen Valley 34-30.

Pope John Paul II at Berks Catholic
The Poopster hopes that the Golden Panthers can stay healthy this fall, but even a full squad is going to be up against it vs. the Saints, coached by the Poopster's owner's old buddy (and St. Pius X grad) Rick Keeley ... Berks Catholic 27-17.

Quakertown at Upper Perkiomen
The Poopster would really like to see coach Steve Moyer and the Tribe get off the duck and snap their 11-game losing streak. Though it's a definite possibility against the Panthers (who have lost 10 straight), he's going to say ... Quakertown 30-20.

Souderton at Pottsgrove
While it likely won't be an easy opener for the defending PAC-10 champ Falcons, the Poopster feels veteran coach Rick Pennypacker will have his troops ready to go, especially on defense, where they return nine starters. ... Pottsgrove 24-14.

Spring-Ford at Whitehall
The Poopster was very disheartened to see his cynical owner was the only Mercury staffer to pick against the Rams, feeling they might get jobbed on the road. But the Poopster has faith in coach Chad Brubaker's crew. He rode the Rams train all the way to the PIAA-AAAA championship in girls basketball in March, and isn't about to get off now ... Spring-Ford 27-23.

Editor's note: The Poopster is not real thrilled about games on Saturday, since it appears they will severely impact his feeding schedule. That said . . .

Bayard Rustin at Methacton
The Golden Knights play some serious caveman football and will be a handful for the Warriors. The Poopster says ... Rustin 30-16.

Phoenixville at Great Valley
The Poopster expects a hard-hitting effort from the scrappy Phantoms in the traditional Route 29 rivalry, but it might not be enough against the Patriots ... Great Valley 23-14. 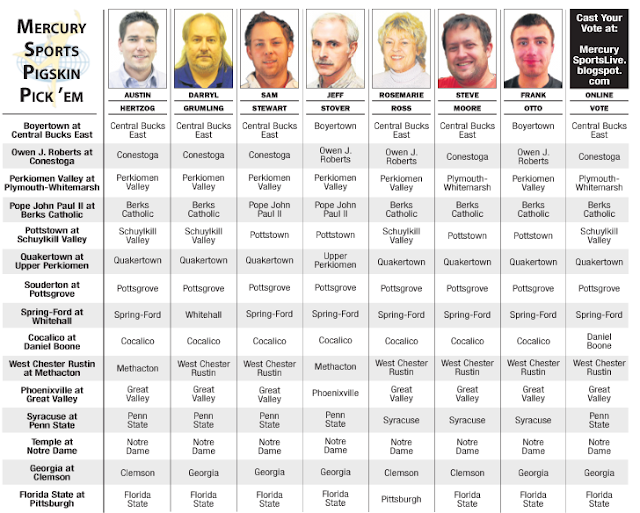 The big day is finally here. We know you're ready -- and so are we.

In addition to 11 high school football games this weekend (our picks available above), there's a full slate of soccer, field hockey and other fall sports is on the schedule for today.

At The Mercury, we're ready to go (as you can see by a 9 a.m. post). Join us tonight at www.GametimePA.com for a live football scoreboard, video and complete coverage of not only the action on the gridiron but also the full rundown on today's other local events.


You can see all of Darryl's football previews in Friday's Mercury by visiting GametimePA.com:
Join us on Twitter all day today and get amped up for your favorite team. Tweet us @PottsMercSports & @GametimePA_SE and tell us which game you're going to and who you think will win. Let's see which team has the best support!
Posted by Steve at 9:11 AM No comments:

The time has come. Football picks are back in The Mercury!

Each week, our picks will appear in the Friday edition of The Mercury, as we choose a winner in all of the weekend's high school games, as well as a few college and/or pro games (Ursinus, Penn State, Mercury Sports Live.
Eagles, etc.). You'll get an early look on Thursday nights at

Early in the week, we will post poll questions down the left side of the homepage at Mercury Sports Live asking for your vote. The consensus pick for each game will be YOUR pick for the week.

Do you agree with what you see below? Disagree? Would you rather us pick against your team? Let your voice be heard on Twitter, just tweet @PottsMercSports with the hashtag #MercFBPicks. 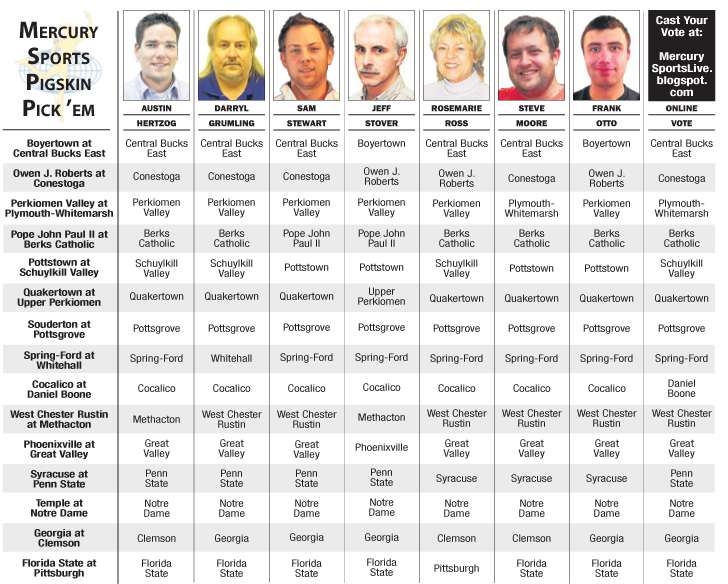 Step Right Up and MAKE YOUR FOOTBALL PICKS!

Football season is nearly upon us.
You'll see a few changes around here, including the exciting move to GametimePA.com for all of our local sports coverage.

But first: High School Football Picks are BACK! And we want YOU to see if you can beat us.

The Mercury Sports staff will be picking every high school game each week, as well as a few others (Ursinus, Penn State, Eagles, etc.) to round the number out to 15 picks each week.

Each Monday, you'll find polls down the left side of Mercury Sports Live asking for your picks for the week. Then, when the picks appear here on Mercury Sports Live - and in Friday editions of The Mercury - you'll not only see picks from Mercury staff, but also the consensus of YOU, the readers and fans.

So, look to your left, and GET VOTING! You have a short week to get your picks in, so do it now and tell your friends and fellow fans to do the same.

Posted by Mercury Sports Live at 1:06 AM 2 comments: