COLLEGE PLAYER OF THE WEEK 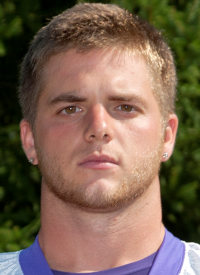 When Phoenixville graduate Sam McQuiston headed out to Ohio to line up for Kenyon College, he didn't think he would go nearly three full seasons without a win ... but he did.
Until last Saturday, when the junior defensive back came up with one tackle and a big interception to help the Lords end a 24-game losing streak with a 31-14 rout of state rival Earlham. It was the Lords' first win since defeating Oberlin, 21-9, back on Oct. 17, 2009.

HONORABLE MENTION: Gotta give some props to younger brother Alec McQuiston, a freshman at Kenyon, who had five tackles in the win over Earlham. ... Also honorable mention, Shippensburg quarterback Zach Zulli (Perkiomen Valley) - last week's Player of the Week - was at it again by completing 22 of 41 passes for 348 yards and four touchdowns, catching one pass for four yards and a touchdown, and running seven times for 25 more yards in the Red Raiders' 55-35 shootout with Slippery Rock. It's the first time in eight years Shippensburg has opened a season 2-0.

Posted by Mercury Sports Live at 8:18 AM